October 2, 2019 – The popular Christmas gift of a bottle of expensive Single Malt Scotch whisky could become more expensive this holiday season for American consumers. The Trump Administration is including Scotch and Irish single malt whiskies on a preliminary list of European imports to be hit with 25% tariffs as early as October 18. The list also includes French wines, Italian cheeses, British cashmere, and a wide array of other products.

The move comes after a much-expected World Trade Organization ruling allowing the United States to take punitive action against the European Union for providing subsidies to Airbus that violate WTO rules. The WTO granted permission for the U.S. to impose tariffs on approximately $7.5 billion (USD) of goods imported from European Union member countries to compensate for the impact of the Airbus subsidies on the U.S. economy.

“For years, Europe has been providing massive subsidies to Airbus that have seriously injured the U.S. aerospace industry and our workers. Finally, after 15 years of litigation, the WTO has confirmed that the United States is entitled to impose countermeasures in response to the EU’s illegal subsidies,” U.S. Trade Representative Robert Lighthizer said in a news release announcing the tariffs. The U.S. will formally ask for permission to impose the tariffs in a meeting expected October 14 at WTO headquarters in Geneva, Switzerland.

The WTO is expected to issue a similar ruling next year in a European Union complaint that the U.S. illegally subsidizes Boeing in the same way. The EU complaint is lagging several months behind the U.S. complaint in the trade organization’s dispute resolution process, and European Union leaders have pledged to retaliate in a similar way once their complaint is resolved.

The U.S. tariffs primarily target goods from the United Kingdom, France, Italy, and Spain – the four countries deemed most responsible for providing the subsidies to Airbus, and here is where the issue of Irish Whiskey becomes murky. Lighthizer’s list of goods subject to the tariffs in Wednesday’s announcement is described as preliminary, with the “definitive product coverage” to be published in the Federal Register before the tariffs take effect. It also specifies that the tariffs will apply only to “Products of the United Kingdom.” 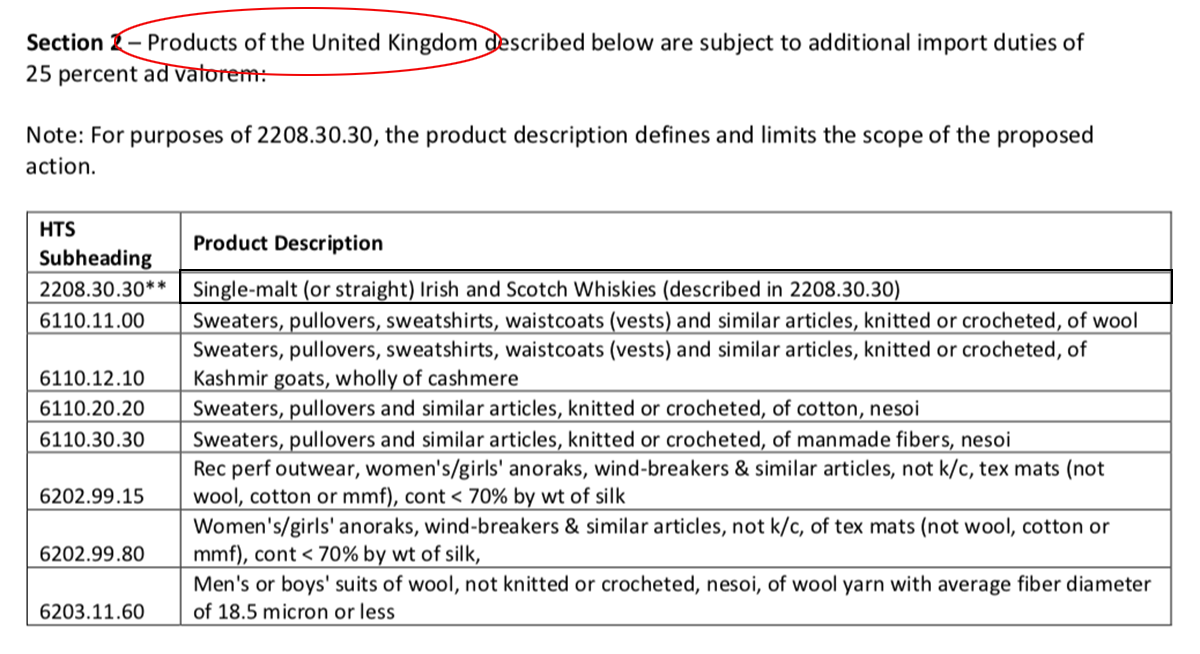 Of course, that raises the question of whether the tariff will apply to all Irish whiskies, since only the six counties of Northern Ireland are part of the United Kingdom. The remainder of Ireland is most certainly not part of the United Kingdom – as anyone who has been following the Brexit negotiations and the debate over the “Irish backstop” aimed at preventing the return of a hard border between Northern Ireland and the Republic of Ireland. The USTR’s list is unclear on this point, and WhiskyCast has asked the agency for clarification on this issue.

Industry trade groups on both sides of the Atlantic had been pleading with the Trump Administration to leave whisky out of this dispute, which is separate from the issue over steel and aluminum tariffs imposed by the U.S. last year that led to retaliatory tariffs on exports of Bourbon and other American whiskies to Europe. That 25% tariff has cost American whiskey makers more than $100 million in lost export sales since it was imposed in July of 2018, according to the Distilled Spirits Council of the United States.

DISCUS CEO Chris Swonger called the move a devastating blow for the spirits industry. “While we recognize the U.S. and EU are trying to solve long standing trade disputes, distillers on both sides of the Atlantic have become collateral damage in matters that are completely unrelated to our industry,” he said in a statement Wednesday evening. “As the important holiday season approaches, we urgently call upon the U.S. and the EU governments to get back to the negotiating table and return to tariff-free trade with our largest export market.” WhiskyCast has also contacted the Scotch Whisky Association and the Irish Whiskey Association for their reaction to the tariffs.

The tariff is expected to have a serious impact on prices of Scotch and Irish single malt whiskey for consumers, since the tariff will be imposed on importers as shipments reach the U.S. border and will likely be passed on to regional distributors, local retailers, and eventually consumers. 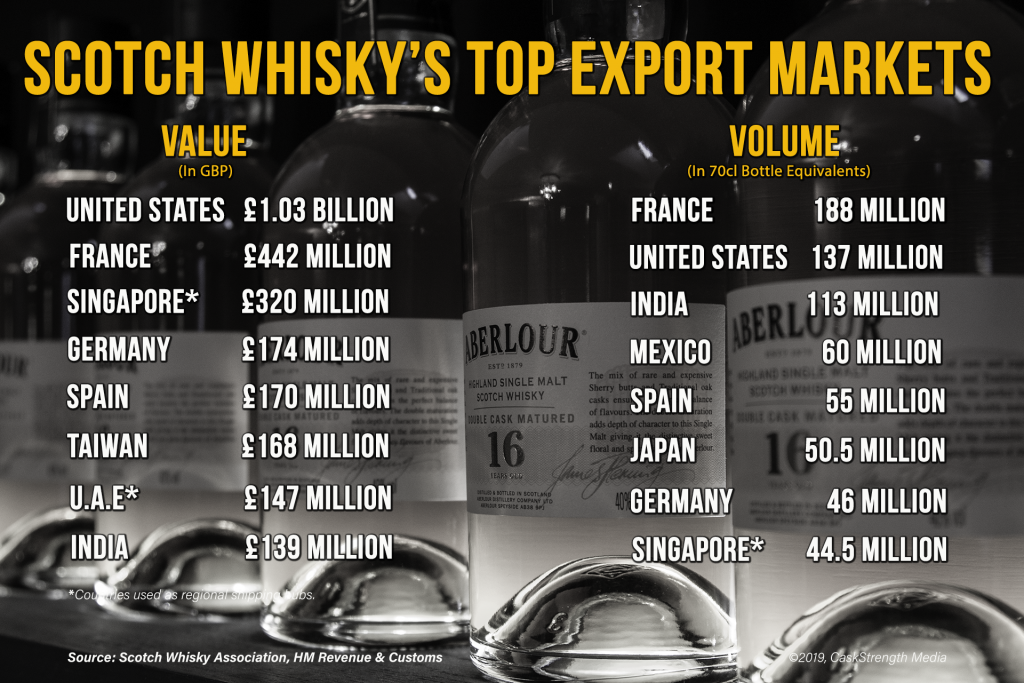 Similarly, while the U.S. is the single largest market worldwide for Irish Whiskey, the decision to only impose tariffs on single malts from Ireland will affect just a small portion of exports – should it be applied to all Irish single malts instead of just those produced in Northern Ireland. Pernod Ricard-owned Jameson and many top-selling Irish Whiskeys are blended from varying recipes of single malt, single pot still, and grain whiskey, and will apparently not be subject to the tariff. That also applies to Single Pot Still Irish Whiskies such as Redbreast, which are distilled from a combination of malted and unmalted barley.

Should the tariff be limited to Northern Ireland, the hardest-hit company would likely be Proximo Spirits, which owns the Old Bushmills Distillery in County Antrim. Bushmills produces several ages of single malt whiskies in addition to its blended whiskies, and is one of the largest exporters of Irish single malt whiskey to the United States under the Bushmills and The Sexton brands. While several small craft distillers have opened in Northern Ireland in recent years, very little of their production reaches the export market at the present time.

If the tariff is extended to cover all of Ireland, it would not only affect Bushmills, but other top-selling  brands of Irish single malt whiskey such as Knappogue Castle (owned by Castle Brands, which agreed last month to a merger with Pernod Ricard), and Tullamore D.E.W. (owned by William Grant & Sons). In addition, a number of Ireland’s emerging craft distilleries have been exporting single malts to the U.S. over the last couple of years, including the Teeling Whiskey Company, Glendalough Distillery, and Clonakilty Distillery.

Listen to this weekend’s WhiskyCast podcast for more coverage.

Editor’s note: This story has been updated to include more details on the extent of the tariff and the issue of whether it will only apply in Northern Ireland or include the Republic of Ireland.