October 15, 2018 – Long before master blenders became celebrities within the spirits industry, Tom Jago was creating spirits that are regarded as global icons to this day. He was responsible for developing Johnnie Walker Oldest – known today as Blue Label, along with the original Classic Malts range of single malts, Bailey’s Irish Cream, Malibu Rum, and many others during his career. Tom Jago passed away Friday at the age of 93, just months after the death of his wife Penelope. 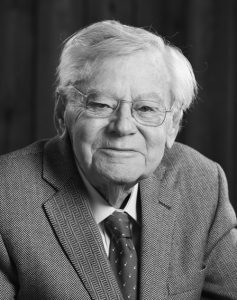 His drinks career spanned six decades, starting with Diageo predecessor IDV. In 1977, as IDV’s head of global innovation, he teamed up with marketing guru James Espey in what became a lifelong partnership. Over the years, Jago and Espey worked together at United Distillers, where Jago selected the whiskies and Espey created the marketing programs behind the Classic Malts and Johnnie Walker Oldest. At Chivas, where Espey was the company’s chairman and brought in Jago to run new product development, they created the iconic Chivas Regal 18.

In a statement announcing his friend and partner’s death, James Espey noted that today’s drinks industry owes a lasting debt to Tom Jago for his decades of work. “Today, a significant proportion of the profits of both Diageo and Pernod Ricard are due to the creative genius of Tom Jago. He never received a bonus for his work but he genuinely loved what he did until his very last day,” Espey noted. “Only a fortnight ago he was teaching his granddaughter Emily all about the Scotch Whisky industry, including a tutored tasting, before her WSET exam!”

“If you aren’t having fun doing it, you can go and be a hedge funder or something…I’ve had fun all the time I’ve been in since 1963, and I’m still having a lot of fun.” – Tom Jago

In 2007, at an age where most people would have gratefully retired after a long and successful career, Jago and Espey teamed up with Peter Fleck to create The Last Drop Distillers in 2007 to bottle small unique parcels of spirits. Their first release came in 2008 with The Last Drop 1960 Blended Scotch, and Tom Jago continued to serve as the company’s president until his death. Both men brought their daughters, Rebecca Jago and Beanie Espey, into management roles with the company, which became a unit of Sazerac in 2016.

“Tom and I have worked together for 40-odd years,” James Espey said in a 2008 WhiskyCast interview with both men. “If you like, I painted the big picture while Tom is the craftsman who puts in all the details and makes it happen, so we complement each other.” Together, they ignored market research and went with their gut instincts. “Nobody ever loved any of the brands we created,” Jago said at the time – until the profits started rolling in.

In addition to his daughter Rebecca, Tom Jago is survived by three other children, including Berry Bros. & Rudd CEO Dan Jago, along with six grandchildren and a brother.