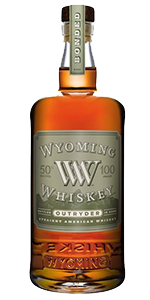 This is Wyoming Whiskey’s first attempt at a Rye-based whiskey, and I think it’s well worth repeating. Outryder is a 4-year-old bottled in bond Straight American Whiskey blended from two different mashbills: one with 48% winter rye, 40% corn, and 12% malted barley, and the second a more traditional Bourbon mashbill of 68% corn, 20% rye, and 12% malted barley. Both were distilled in November of 2011, and blended and bottled four years later.