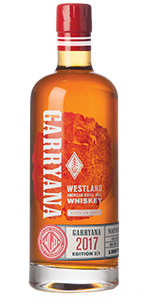 This is the second annual release of Westland’s single malt matured in Garry Oak casks from the Pacific Northwest. Unlike the debut release in 2016, this edition was made with unpeated malt to allow the wood’s own natural phenolic character to come through.

The nose is reminiscent of barbecue smoke, sweet and tangy with a nice woodiness and notes of creme brûlée, allspice, cedar shavings, molasses, brown sugar, and vanilla. The taste is spicier than the nose would suggest, with notes of black pepper, cayenne, and a hint of allspice balanced by honey, barbecue smoke, brown sugar, and a hint of citrus in the background. The finish is long, spicy, and intense. Wow! (July, 2017)