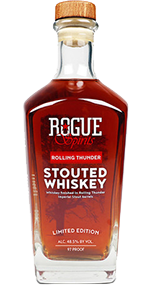 This Oregon single malt has a unique and complex story. After distillation, it’s matured for a year in Oregon oak casks produced at Rogue’s in-house cooperage. At the end of that year, the whiskey is moved to new barrels, while the original barrels are used for nine months to mature Rogue’s Rolling Thunder Stout. Once the beer is emptied and sent off to be bottled for Rogue’s annual Rolling Thunder Stout release, the whiskey is returned to those barrels for two final years of maturation.

The nose has notes of dark chocolate, black cherries, dried fruits, coffee beans, and hints of caramel, molasses, and vanilla. The taste is complex and changing, starting off with chocolate, coffee beans, honey, spicy touches of black pepper and allspice. It suddenly changes to highlight the stout’s influence with a creamy maltiness, caramel, and honey while subtle spices linger throughout the finish. Perhaps one of the best beer-influenced whiskies around! (March, 2019)