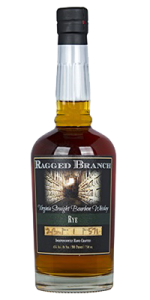 Virginia’s Ragged Branch Distillery near Charlottesville makes two different Bourbons with wheat and rye-forward mashbills. Their “signature recipe” rye version has soft spices on the nose along with honey, vanilla, and a hint of orange peel. The taste starts off with a touch of caramel cola followed by a nice burst of cinnamon and touches of honey, caramel, orange peel, and butterscotch. The finish has a lingering touch of cinnamon with honey and caramel for a nice overall balance. Very nice! (August, 2018)