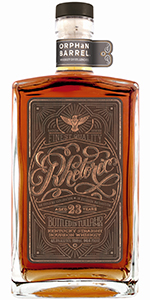 This is Diageo’s 2017 release in the Rhetoric series, and is the fourth of five planned whiskies using a batch of barrels originally filled at the Bernheim Distillery in Louisville between 1990 and 1993 when Diageo predecessor UDV owned it. Those barrels were later moved to the Stitzel-Weller warehouses nearby, where they remained until being bottled at Diageo’s George Dickel Distillery in Tennessee.