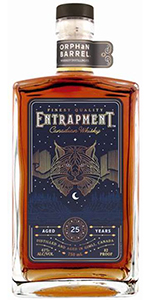 The first whisky in Diageo’s Orphan Barrel range to come from outside of Kentucky, this 25-year-old whisky was distilled in 1992 at the Crown Royal distillery in Gimli, Manitoba. It came from barrels of whisky made from 97% corn and 3% malted barley that were left over from a batch of Crown Royal Deluxe – and sat in a warehouse at the distillery until they were used for Entrapment in 2017.