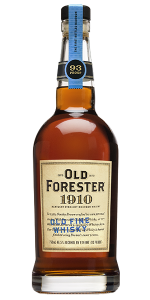 This is the fourth and final release in Old Forester’s “Whiskey Row” series celebrating the opening of the Old Forester Distillery on downtown Louisville’s “Whiskey Row” along Main Street in what was once Brown-Forman’s headquarters. It’s based on what may be one of the first “double-matured” whiskies from 1910, when a fire damaged Brown-Forman’s bottling line in Louisville. Repairs took some time, and whisky that had already been batched and proofed to 50% ABV was put back into casks while the repairs were completed. At bottling time, company president Owsley Brown declared it to be an “Old Fine Whisky.”

The 2018 version was created using that same method – minus the fire. Mature Old Forester is reduced to 50% ABV and put into heavily charred oak casks for a final period of maturation before being bottled at 46.5% ABV. The nose is aromatic with touches of caramel, butterscotch, apricots, toffee, soft spices, and a touch of pencil shavings. Spices build up nicely on the palate along with hints of raisins, brown sugar, caramel corn, and a hint of cinnamon that develops late and leads into the finish. That cinnamon note becomes cinnamon raisin bread on the finish, which lingers nicely with touches of caramel and campfire smoke. (October, 2018)

Note: Old Forester uses the “Whisky” spelling without the “e” in its branding, unlike most Kentucky Bourbons that use the “e.”