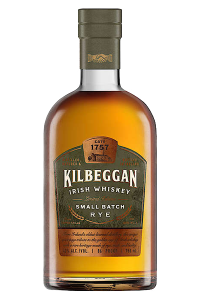 This is a rarity: an Irish Rye Whiskey distilled in pot stills. The mashbill is about 30% rye, along with malted and unmalted barley, and was distilled before a change in Irish law that limits “single pot still” whiskies to a maximum of 5% grain other than barley – which is why it’s labeled as a “Small Batch Rye.” It’s also the first Kilbeggan whiskey to be made completely from spirit distilled at Kilbeggan since the restored distillery reopened in 2010. Until now, Kilbeggan-branded whiskies have usually contained a percentage of Kilbeggan spirit blended with distillate from co-owned Cooley Distillery.

The nose has notes of dark fruits, subtle baking spices, molasses, vanilla, and a hint of coconut. The taste reminds me of shortbread cookies at first, followed by touches of allspice, dried fruits, and a nice touch of oak. The finish is long with touches of spice and dried fruits. Very nice! (October, 2018)