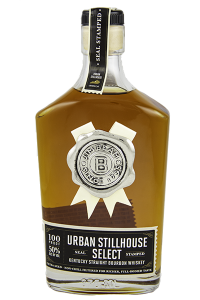 This four-year-old Bourbon is available only at the Jim Beam Urban Stillhouse in Louisville’s Fourth Avenue Live entertainment district and a handful of Kentucky retailers. While future editions will come from the Urban Stillhouse’s own microdistillery, current bottlings were distilled at the Jim Beam Distillery in Clermont, Kentucky – despite what an Urban Stillhouse staff member tried to tell us in mid-2018 less than two years after the place opened. The reason to try this one – it’s bottled at 50% ABV with no chill-filtering.