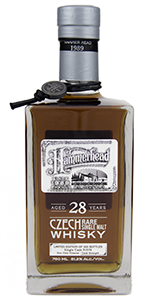 This single malt comes from the old Pradlo Distillery in what is now the Czech Republic. Shortly before the end of Communism in what was then Czechoslovakia, the state-owned Pradlo Brewery distilled hundreds of barrels of single malt whisky in 1989, but after the breakup of the old Soviet bloc, that whisky was forgotten about and left to mature for more than two decades. After Stock Spirits acquired the brewery in 2010, its executives found out about the long-ignored whisky and started bottling it under the Hammerhead brand – not named after the shark, but for the hammer mills used to grind the barley at Pradlo.

While most of that cache of whisky has been blended and bottled over the years, this is a rare single cask and cask-strength version produced for Glass Revolution Imports and is the first time Hammerhead has been available in the U.S. market. The nose has notes of ginger, allspice, barley sugar, a nice oakiness, Christmas cake, and hints of black tea and honey. The taste is thick and very spicy with cinnamon, allspice, and clove notes that fade slowly to reveal ginger, orange peel, Christmas cake, and honey. The finish is long and equally complex. Wow! (March, 2018)