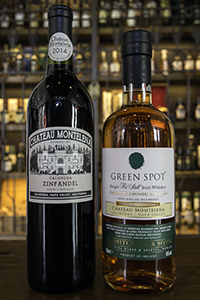 This is the second wine cask-finished version of Green Spot, and like the first Chateau Leoville Barton edition, this one has an Irish heritage. The Barrett family emigrated from Ireland to the United States and eventually settled in California’s Napa Valley, where Jim Barrett helped revive Chateau Montelena in the early 1970’s and won the legendary 1976 “Judgment of Paris” wine tasting over a flight of France’s best wines. His son Bo collaborated with the Irish Distillers team to produce this Zinfandel cask-finished edition of Green Spot.

The nose has notes of strawberry jam, raspberries, red apples, pears, hints of toasted marshmallows and oak, and a touch of spearmint in the background. The taste can be described simply: berries, berries, and more berries! It’s thick and sweet with strawberries, raspberries, pears, and red apples, along with pot still spices that never overpower the fruitiness or hints of oak and vanilla in the background. Water adds touches of dried flowers, rosemary, and apple peel. The finish is very long and fades away with clove, allspice, and white pepper spices complemented by fruity notes and a subtle hint of spearmint. Outstanding! (October, 2017)