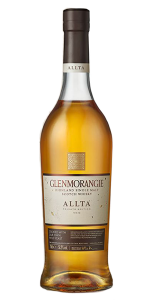 This is the tenth release in Glenmorangie’s Private Edition series, and is the most unique Glenmorangie single malt in many years. The barley for this whisky came from the Cadboll Farm near the distillery, and so did the yeast used to ferment it. Glenmorangie’s whisky-making team worked with their yeast suppliers to isolate and cultivate a unique strain of wild yeast from the farm that differs greatly from the standard “distiller’s yeast” used at Glenmorangie and many other distilleries in Scotland.

The nose is malty and aromatic with notes of barley sugar, vanilla pods, a hint of citrus, and earthy touches of sawdust and dry green grapes. The taste starts off dry and sherry-like at first, followed by a burst of white pepper, allspice, ginger root, barley sugar, garden herbs, citrus, and a hint of honey. Water brings out a yeasty note of rising bread dough and accentuates the subtle floral notes in the background. The finish is long and malty with barley sugar and touches of tropical fruits. Excellent! (January, 2019)