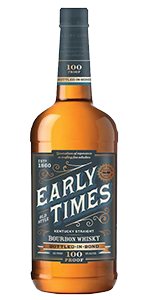 Early Times is one of those historic American whiskey brands that lost its way when Bourbons fell out of favor among consumers in the 70’s, and wound up becoming a bottom-shelf American Whiskey matured in used barrels. The export version of Early Times always remained a Bourbon (new barrels), and in recent years, Brown-Forman has tried to give the brand a boost. The Early Times 354 edition released several years ago never caught on with consumers, though, and this “Bottled in Bond” version is the latest attempt to make Early Times relevant once again.