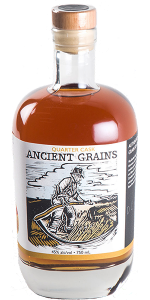 This comes from de Vine Wines & Spirits in Victoria, British Columbia, and since it’s only two years old, it’s technically not a whisky yet under Canadian law. However, we include it here because it’s made from a unique set of “ancient” grains: spelt, emmer, khorosan and einkorn along with locally grown British Columbia barley.

The nose has notes of buttered popcorn, honey, and caramel. The taste is dark, oaky, young, and fiery with cinnamon and black pepper, while there are hints of sweeter notes that will need more time in the cask to develop. The spices linger on the finish, and as might be expected, this spirit is a bit lacking right now in complexity. However, it shows a lot of promise for the future and this current rating should be seen as a benchmark for future potential as more mature versions are released. (January, 2019)