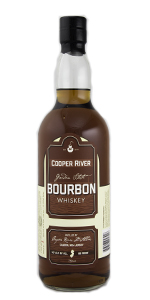 This is the debut batch of Bourbon from Cooper River Distillers in Camden, New Jersey, and uses locally grown grains while being matured for slightly more than a year. Distiller James Yoakum cuts his spirits at a lower proof than most other distillers, and that leads to a different taste profile than many Bourbon drinkers are used to, with what might be considered a “feinty” taste on the palate.

The nose is oaky with a healthy aroma of tannins, vanilla, molasses cookies, and brown sugar. The taste is tart with notes of lemon zest, green apples, and almond oil followed by the spices in an unusual reversal of flavors. Black pepper, clove, and vanilla notes come in late and stick around through the finish, which is long, tart, spicy, and slightly astringent. An interesting debut Bourbon, but one that will likely benefit from more time in the barrel for future batches. (February, 2017)