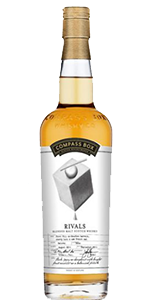 You may have a hard time finding this Compass Box whisky, since it was bottled primarily for Julio’s Liquors near Boston (which supplied our sample) and Astor Wines & Spirits in New York City (but turned up at a handful of other retailers as well). The name comes from the natural rivalry between Boston and New York, and the whisky comes from a blend of Macallan, Teaninich, the now-closed Imperial distillery, and some of the French Oak-finished Highland malt blend that was featured in Compass Box’s Flaming Heart.