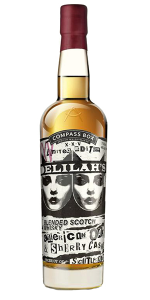 Compass Box created this Blended Scotch to celebrate the 25th anniversary of Delilah’s, the classic Chicago whiskey and music bar, in a sequel to the 20th anniversary version released in 2013. This edition uses some of the same whisky blended for the original edition, along with single grain from Cameronbridge and Spanish Oak-matured malts from Miltonduff, Teaninich, Linkwood, and an unnamed distillery located near the town of Aberlour.

The nose is honey-sweet and aromatic with figs, dried fruits, muted spices, and a touch of oak. The taste has allspice, ginger root, and a hint of white pepper balanced by sweeter notes of honey, figs, and apricots underneath. The finish is long and well-balanced with lingering spices, dried fruits, and a hint of honey. Very nice! (July, 2018)