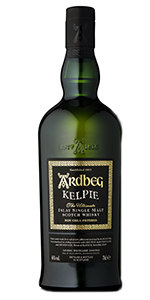 The nose has a gentle peatiness with notes of seaweed, brine, honey, and a hint of smoked salmon. The taste is spicy, smoky, and pungent with notes of peat smoke, clove, bacon, and hints of dried fruits and toffee underneath. The finish is shorter and less spicy than the Committee version, but still has a good balance of creosote, peat smoke, caramel, and dark chocolate. Get the Committee version if you can, but this one is still a good pick. (June, 2017)