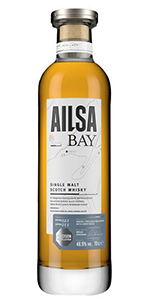 William Grant & Sons uses a different method to produce this single malt at its Ailsa Bay distillery at the Girvan grain whisky distilling complex in Ayrshire. Instead of maturing the malt first and then using a “finishing” cask to add character, Ailsa Bay’s peated spirit starts out in small ex-Bourbon casks from the company’s Tuthilltown Spirits distillery in New York. After several months of jump-starting the maturation, the whisky is then filled into standard-size refill, first-fill, and Virgin Oak barrels for the rest of its maturation time.

The whisky has driftwood smoke and a hint of brine on the nose, along with fresh fruit notes of peaches and red apples. Hints of ginger and allspice add complexity in the background. The taste is smoky and spicy with notes of black pepper, ginger, allspice, honey, peaches, and apples. The finish is long with gently fading spices. (September, 2017)