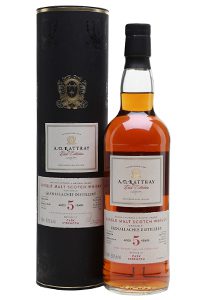 This is a young whisky distilled in July of 2012 and bottled at the end of August, 2017 after five years in an ex-Sherry butt. The nose has notes of blackberries, ginger, raisins, a touch of dried fruits, and molasses. The taste has intense fruity and spicy notes, with orange peel, clove, ginger, and cinnamon. The spices fade slowly to reveal honey, vanilla, and apricot notes. The finish has lingering spices and dried fruits. Don’t hold its youth against it! (October, 2017)