March 9, 2017 – The saga of Nant Distillery’s spiral into numerous legal issues has taken another turn after an audit of the distillery’s maturing whisky stocks found “serious anomalies” in Nant’s “investor barrel” program. According to Australian Whisky Holdings CEO Chris Malcolm, more than 700 barrels sold to investors since the distillery opened have never been filled with whisky. In addition, a large quantity of barrels that were filled for investors have been emptied, bottled, and sold without notifying the barrel owners – or paying them for the whisky. Malcolm accused Nant’s founders of then refilling those barrels with new make spirit that would take longer to mature than the investors had been told to expect – approximately four to five years.

Malcolm notified the barrel investors of his findings in a letter to investors that was posted to a Facebook group set up by several disgruntled investors. In the letter he also disclosed that many barrels had had the owners’ names and barrel numbers sanded off for an unknown reason, and that Nant’s founders had been filling barrels with spirit diluted to 45 percent ABV instead of the industry standard 63.4 percent ABV – again, requiring a much longer maturation time and diluting the potential value of the investment.

While some early investors paid around $5,000 AUD ($3,760 USD), the Nant web site’s current barrel sale offer includes 2 225-litre barrels of whisky, storage, and other fees for $25,000 AUD ($18,768 USD), with a pledge to buy the barrels back after four years for around $36,000 AUD with a 9.5 percent annual compounded interest rate. Batt also operates an Angus cattle breeding operation offering the same rate of return to investors. However, according to Malcolm’s letter to investors, many of their Nant barrels were never actually filled with new make spirit.

“Today it was my deeply sad duty to inform one of the barrel owners that the barrels he had invested in have never been filled and don’t exist. You can imagine how difficult this phone call was for both of us. There are many more of these conversations unfortunately yet to come.”

Australian Whisky Holdings agreed to acquire the Nant Estate in Tasmania from founder Keith Batt’s Nant Group/NAW Parties in January. As previously reported, Batt filed for personal bankruptcy at the end of 2015 owing around $16 million AUD ($12 million USD), but the Nant Group was not included in that filing. The complex deal involved two separate agreements: one for the Nant Estate (including distilleries, land, the bonded warehouse, and a perpetual license to use the Nant brand name) and one for “NAW Distillery Pty Ltd” covering intellectual property and equipment. The deal for the Nant Estate was completed on February 17, and Malcolm’s team began auditing all of the barrel inventory at the estate at that time. 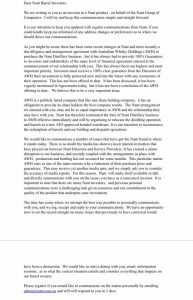 However, the two sides disagree on the reason for the breakdown of the second agreement covering the distillery business. Nant Parties still controls the Nant Distilling Facebook page, and claimed in a March 2 post that Australian Whisky Holdings had lowered its purchase price and refused to provide “100% guarantees to investors” that their investments would be guaranteed.

Chris Malcolm also noted in his letter to investors that Keith Batt and his wife, Margaret Batt, tried to negotiate “side deals” with AWH that would have seen payments made to “Margaret Batt and other companies associated with them, in an attempt to avoid payment to their secured creditors.”

In an email Thursday evening to WhiskyCast on behalf of Nant director Margaret Batt, Keith Batt said Nant is “wanting to set the record straight and will be doing so over the coming days”. The Batts also provided a copy of an email sent by barrel investor Michael Kennett to ABC reporter Will Ockenden following his March 8 story on the AWH audit rebutting some of the audit’s findings and noting that the contract terms under which Nant sold barrels to investors did not specify when they would be filled with whisky. The Batts provided WhiskyCast with contact information for Michael Kennett, but when asked to make Margaret Batt available for a telephone interview, Keith Batt replied in an email “no chance.”

In a March 2 telephone interview with WhiskyCast’s Mark Gillespie, Malcolm outlined Australian Whisky Holdings’s position, noting that many of the Nant Distillery assets are tied up with unpaid secured loans, court judgements, and garnishee orders from creditors and the Australian Tax Office.

“For example, we look at a still operating at the distillery and we say well, that’s part of the distillery, but then you find out no, that’s under finance by a finance company that has a charge over that still…so who owns the still, I don’t know. And the finance company has charges over Keith Batt’s hotels and his bars…we haven’t bought any of that. We are whisky guys, we’re not barkeepers, we’re not hoteliers…we’re whisky guys, so where all that ends up, I can’t tell you…that’s gotta end up with lawyers and collection agencies. Yesterday, I was dealing with the Tasmanian Collection Service, who’ve  got a long list of creditors owed money by the Batts, and they have court judgements against them and they’re saying to me what do we do…well, I don’t know.”

While Nant Parties claims it plans to move the distilling equipment and whisky stocks off of the Nant Estate and resume operations at a new location, Malcolm told WhiskyCast that AWH is “busy making whisky” at the estate and pledged to provide more transparency to Nant’s future operations. “Being a public company, we also have to disclose to the Australian Stock Exchange, and they’re pretty tough in Australia.”

This story will be updated with additional information as it becomes available.

Editor’s note: This story was updated to include comments from Nant Distillery director Margaret Batt and founder Keith Batt.