July 3, 2019 – First responders are on the scene of a massive fire involving two Bourbon maturation warehouses at a Jim Beam facility in Woodford County, Kentucky. The fire started shortly before midnight Tuesday night at the site of the former Old Crow Distillery on McCracken Pike as thunderstorms hit the area. The distillery closed in 1987, but Beam Suntory continues to use the warehouses on the site to mature whiskey.

According to Lexington television station WKYT, approximately 45,000 barrels of whiskey were in the one warehouse still burning as of Wednesday morning. The fire spread to a second warehouse nearby, but firefighters were able to contain it shortly after arriving on the scene. There is no word on what caused the fire, but Woodford County emergency officials are not ruling out a lightning strike as the potential cause.

Beam Suntory has declined to make executives available for interviews at the present time, but issued a statement Wednesday morning:

“We are thankful that no one was injured in this incident, and we are grateful to the courageous firefighters from multiple jurisdictions who brought the fire under control and prevented it from spreading. Initial reports suggest the fire resulted from a lightning strike, and we will work with local authorities to confirm the cause and to remediate the impacts. We have a comprehensive warehouse safety program that includes regular inspections and rigorous protocols to promote safety and the security of our aging inventory. We operate 126 barrel warehouses in Kentucky that hold approximately 3.3 million barrels for our brands, and the warehouse that was destroyed contained 45,000 barrels of relatively young whiskey from the Jim Beam mash bill. Given the age of the lost whiskey, this fire will not impact the availability of Jim Beam for consumers.” 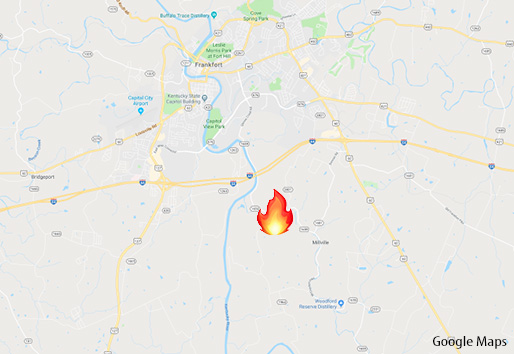 The Old Crow site is a key part of Kentucky Bourbon history. Oscar Pepper built the original distillery along Glenns Creek, and distiller Dr. James Crow made what would become known as “Old Crow” there in the years leading up to the Civil War. The distillery passed through several hands in the years before and after Prohibition until it was purchased by National Distillers. In 1987, Beam Suntory’s predecessor company, American Brands, acquired the distillery along with the whiskey brand and promptly closed the distillery.

Glenns Creek Distilling resumed distilling in 2015 on 16 acres of the original Old Crow site adjacent to the Beam warehouses. A distillery worker told WhiskyCast there has been no impact on their operations from the fire, other than water pooling in the yard outside the distillery and the access road being closed for emergency equipment. The scene is less than half a mile from Castle & Key Distillery, which is also located along Glenns Creek.

This is the second major incident involving a maturation warehouse in Kentucky within the past month, and the third in the past year. Part of a rickhouse at Terressentia’s O.Z. Tyler Distillery in Owensboro collapsed during an overnight thunderstorm on June 16, and barrel recovery work continues at the site. Weather is also believed to be the cause for that collapse, but investigators are still going through the wreckage to determine the exact cause. On June 22, 2018, half of a warehouse at Sazerac’s Barton 1792 Distillery in Bardstown collapsed, while the rest of the warehouse collapsed on July 4, 2018. No cause has ever been disclosed for that incident.

This story will be updated with additional information as it becomes available.