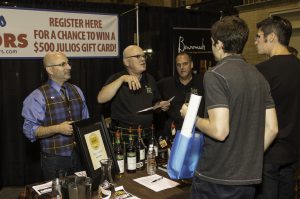 The controversy over Beam Suntory’s sudden decision to change its plans for a Booker’s Bourbon price hike during the New Year’s holiday weekend left both retailers and consumers confused. We’ll look at whisky pricing from the retailer’s perspective with Ryan Maloney of Julio’s Liquors in the Boston suburb of Westborough, Massachusetts, and he’ll explain how retailers set their prices and work with whisky makers and distributors. We’ll also catch up with Ben Bowers as he winds up his “A Dram a Day” campaign to raise money for a British children’s hospital on WhiskyCast In-Depth. In the news, Constellation Brands is still expanding its craft distilling portfolio with a deal announced this week for a stake in Virginia’s Catoctin Creek Distillery, frequent fliers will find a new Bourbon bar in Louisville’s airport, and with the inauguration of Donald Trump closing in, a signed bottle of the Scotch Whisky bottled for his first Scottish golf course is going on the auction block.