Andrew Weaver, the leader of the Green Party in British Columbia’s Legislative Assembly, blasted the government’s decision to raid the four bars and seize their bottles of the Scotch Malt Whisky Society’s whiskies following a Twitter campaign from whisky lovers demanding a change in provincial laws. 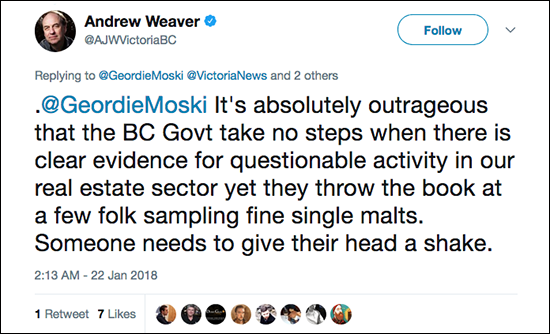 Weaver’s Green Party is a partner with the New Democratic Party in the province’s coalition government. British Columbia Premier John Horgan, the leader of the NDP, has not yet addressed the issue, and spokesmen for the Ministry of the Attorney General have declined all interview requests since the raids. The Liquor Control & Licensing Branch is part of the Ministry, but spokesmen claim the Attorney General has no role in the branch’s enforcement actions.

Thursday, LCLB inspectors and police raided Fets Whisky Kitchen in Vancouver and The Grand Hotel in Nanaimo, along with The Union Club and Little Jumbo in Victoria. The agents seized 242 bottles of Scotch Malt Whisky Society whiskies from Fets and 11 from The Grand Hotel on the grounds that the bars had acquired those whiskies illegally from the two private liquor stores in British Columbia that carry SMWS whiskies. According to local news reports, Little Jumbo’s owners had removed its SMWS whiskies from the premises earlier this month after hearing reports of a similar enforcement action against another local bar. The private Union Club has not commented on whether it had any whiskies seized.

Susie Sirri, the operations manager of The Grand Hotel, was in Vancouver when she was notified of the raid at her family’s hotel in Nanaimo. The hotel had joined the Society’s ranks of partner bars in 2017, and had not built yet up a large inventory of SMWS whiskies.

“I ended up going to Fets Whisky Kitchen to see the liquor inspectors there,” she said in an interview. “When I walked in, I recognized the two gentlemen that were confiscating the bottles and I said ‘you look very familiar,’ and they said ‘well, that’s right…you helped us when we were at your hotel a week ago asking you about Scotch Malt Whisky Society in plain clothes.” Sirri said the inspectors refused to explain why they didn’t discuss the issue with her at that time, but said she was told that there was a “big investigation and they couldn’t say anything.”

The crackdown came just as one of British Columbia’s largest whisky events of the year was getting underway. The Victoria Whisky Festival attracts whisky lovers from around North America, and has become regarded as one of the world’s top whisky events because of the variety of whiskies available to taste. That changed following the crackdown, as exhibitors scrambled to adjust their plans out of fear that the province’s liquor inspectors would conduct a similar crackdown at the festival. 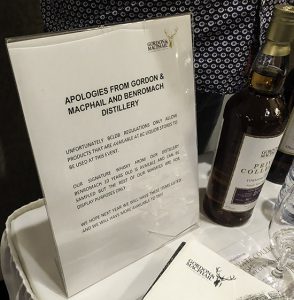 “We’re just pouring what we’re allowed to pour,” said Gordon and MacPhail’s Richard Urquhart. Urquhart had flown to Victoria from Scotland for the festival, along with a series of meetings in other Canadian cities. The family-owned company has been a longtime supporter of the festival, and has presented a number of rare whiskies in previous years. This year, Urquhart and his colleagues had to cancel a master class scheduled for Saturday because only one of their whiskies (the Benromach 10-year-old) is carried in the provincial stores. They had planned to open a 1972 Strathisla and a 35-year-old Benromach for the master class and Saturday night’s consumer tasting, but left both bottles sealed on the table next to a sign explaining the situation.

Other exhibitors took a similar approach, with Jonathan Bray of Calgary-based Secret Spirits keeping all of his whiskies closed for the night while explaining the issue to consumers. The Scotch Malt Whisky Society was forced to cancel a Friday night tasting for around 80 people, along with two master classes on Saturday, and had also brought in the Society’s global brand ambassador from Scotland to meet with members and consumers during the weekend. Kelly and Rob Carpenter, who own the Canadian brand of the Society, have pledged to make up any shortfall in the festival’s contributions to two local charities caused by the cancellation of their events.

Under British Columbia law, bars and restaurants are required to purchase alcohol directly from the British Columbia Liquor Distribution Branch, and are not allowed to buy from the province’s privately-owned liquor stores. The requirement dates back to before the province legalized private liquor stores, which must still order all of their whiskies through the provincial system. While those stores are allowed to place special orders for whiskies not carried in the province’s BC Liquor Stores, bars and restaurants are limited to only what the BCLDB chooses to stock in its inventory. That same requirement extends to special events such as the Victoria Whisky Festival, though no inspectors were openly visible at the event during the weekend.

“I really would like to know some of the reasoning behind why they did this,” said festival attendee Tim Vickers as he pointed to a pair of Springbank single malts that were on display but not available to taste. “Why now, after ten years of not enforcing this law, why now?” Other attendees expressed similar frustrations with the government crackdown as well. “It’s not a tax issue, because the taxes are paid, but it seems to be regulators flexing their muscles unnecessarily,” said Dave Mason of the West Coast Whisky Society in Vancouver.

The Grand Hotel’s Susie Sirri pointed out that the government crackdown unfairly targets only one specific whisky brand and the limited number of bars that offered it. “What about the bars that are carrying all of the specialty gins or the specialty vodkas … are they going to close down Gastown, are they going to close down all of the other bars that each have a bottle of whatever? I mean…every bar in British Columbia is carrying something from a private liquor store to stay competitive.”

This story will be updated with additional information as necessary. WhiskyCast has requested an interview with spokespersons for the Ministry of the Attorney General, and that request has been declined for now.